MTA courier winding through Moscow traffic to make a delivery of hot pizzas from the thermal bag under his raincoat.

LOUISVILLE, KENTUCKY – Unlike in the United States where the pizza delivery industry is more than 50 years old, the Russian market started developing only in the 1990s and will demonstrate stable growth in the coming years with more customers ordering pizzas to homes and offices, a U.S. pizza delivery chain said.

Papa John's Russia, one of Moscow's pizza delivery chains that is capitalizing on a growing demand for the product, said that more and more Russians can afford to give up on their cooking routines, despite a setback for the market from the crisis.

“People are working 12-hour days and spending one to two hours in traffic every day, and they are accustomed to going out and eating in restaurants,” Christopher Wynne, chief executive of Papa John's Russia said in an interview. “This leads them to accepting delivery as an option.”

Wynne, who flew reporters to the company's headquarters in Louisville, said he expected the company's same-store sales by delivery in Russia to increase 35 percent this year from last year.

The number of calls from customers ordering pizza to homes and offices is higher with every year, said restaurant chain Sbarro, which generates up to 10 percent of its revenue from delivery sales. A year-on-year increase in the number of such orders was 22 percent in January through September this year, the company said in e-mailed comments.

Orders to offices and homes accounted for 44 percent and 56 percent, respectively, it said.

“Many customers have started to understand that it's better to order a pizza made of fresh products than to buy frozen convenience foods,” Sbarro said. “Big city dynamics and rhythm also affect the growing popularity of pizza delivery. … Consumers have time only for having a bite.”

Pizza delivery is growing thanks to improving service, said Yelena Lagutina, chief executive of another chain on the market, Pizza Fabrika. The company has seen sales — primarily by delivery — grow by 3 percent to 4 percent annually in the past few years, she said.

Although bigger chains enjoy better business, the overall pizza market took a hit last year amid a crisis-driven plunge in consumer confidence that forced small pizza companies to shut down, said Andrei Lumpov, president of consulting center Invest-Project. The Moscow pizza market dropped by 12.4 percent to $161 million last year, he said. It will probably expand by 0.5 percent this year and resume fast growth in early 2012, he said.

Lumpov predicted that existing pizza companies would meet 81 percent of demand by the end of next year.

Comparison with other big cities, however, suggests that competition is low in the delivery segment and there will be room for many more pizza outlets. Moscow, with its 10.6 million people, has just about 300 pizzerias focusing on delivery, Wynne said, while there are more than 3,000 pizzerias for 8 million New Yorkers.

“The delivery market is absolutely underdeveloped, with people becoming more and more accustomed to ordering delivery each year,” said Wynne, who controls 51 percent of Papa John’s Russia, a franchise of the U.S. company.

In an attempt to meet the growing demand, pizza delivery chains are expanding business in Russia.

Papa John's has invested a total of $11 million in Russia over the past seven years into stores and a production center and plans to open more restaurants across the country in the coming years, Wynne said. The company plans to have 40 to 50 restaurants in Moscow and the Moscow region by the end of 2013, up from the current 13.

Following the expansion, Wynne said the company planned to float shares on a stock exchange over the coming three to five years. He didn't specify where it would seek to list.

Papa John’s accounted for 2.7 percent of the overall pizza sales market last year, according to Invest-Project. The market leader is Il Patio, with 41.9 percent, followed by Sbarro, whose share is 19.3 percent. Pizza Fabrika has 8.2 percent.

Many of the Western franchise businesses say they have to adapt to Russia's eating culture.

Papa John's offers its customers a “To Russia With Love” pizza with mashed potatoes, which was created six years ago specially for the Russian market and was approved by the company's top management in Louisville.

Taking into account the Russian soup-eating habit, the company has introduced soups, which are also good sellers, he said.

In another difference, customers in traffic-choked Moscow worry less about waiting extra time for delivery, Wynne said. Moscow delivery staff take at least 45 minutes to get an order to the door, while U.S. consumers “are not happy” to wait for their pizza longer than 30 minutes, he said.

Restaurant chains have said they divided Moscow into several delivery areas and assigned them to specific restaurants. Klyagin suggested increasing the number of stores or beating traffic by having delivery staff use motorbikes, rather than cars. 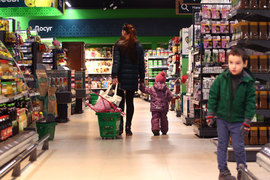 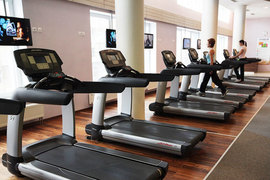 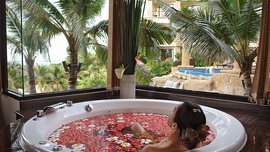 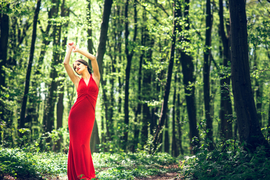